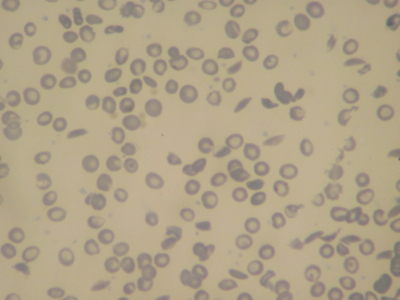 With a very few exceptions (Blood 1989; 74: 1817-22) the sickle cell and the thalassaemia gene are arranged in trans i.e on different chromosomes (βs/βthal). One allele is inherited from the mother and one from the father. One parent carries the a β-thalassaemia trait the other parent has a sickle cell disease that may be sickle cell anaemia, sickle β-thalassaemia or a trait. Sickle β-thalassaemia in Africa and India/Arabia is mild whereas the patients from the Mediterranean region have severe disease. As mentioned above the differences in severity have to do with severity of the β-thalassaemia and the degree to which the impaired haemoglobin A synthesis is compensated by HbF. Weatherall suggested that patients with HbA <15% follow a course similar to severe HbA and those with HbA 20-30% follow a mild course.

The features of sickle-β thalassaemia resemble those of other sickling disease. It is a chronic haemolytic anaemia the course of which is interrupted by acute exacerbations known as crisis. The manifestations include haemolytic anaemia, painful and other crisis, leg ulcers, priapism and complications of pregnancy. The severity of symptoms is variable. One end of the spectrum are patients, usually of origin Mediterranean descent, whose presentation is indistinguishable from sickle cell anaemia. These patients have inherit severe forms of β (β0) chain defects. Those with sickle cell-β+ thalassaemia have milder symptoms. These patients are typically of African ancestory. Unlike patients with sickle cell anaemia patients with sickle-β thalassaemia may have splenomegaly that is more prominent patients with sickle cell-β+ thalassaemia. The spleen is usually moderately enlarged but massive splenomegaly that may be associated hypersplenism neccesisating splenectomy has been reported. The effect of co-inheritance of α-thalassaemia is small. A decrease in the frequency of acute chest syndrome and leg ulcers and a higher persistence of splenomegaly is seen. Co-inheritance of α thalassemia is one of the reasons that sickle-β thalassaemia runs a milder course in India (the other being the high HbF due to the Arab-Indian haplotype of HbS).

The haematological findings vary with severity. More severe phenotypes shows greater anaemia, lower MCHC, higher reticulocytes, HbF and HbA2. A variable number of sickle cells may be found. Unlike sickle cell anaemia both forms of sickle cell-β thalassaemia have an elevated HbA2. The distribution of HbA2 is very similar to heterozygous β thalassaemia. The levels of HbF are variable. High levels are found in patients with the Arab-Indian and Senegal haplotype of HbS.

Almost all patients with sickle-β thalassaemia have the disorder in trans i.e. the one β globin gene is thalassaemic and the other has a the sickle mutation. Patients with HbS and thalassaemia gene in cis have been described. These patients have a mild hemolysis, HbA2 levels were 6%–7%, HbF approximately 3% and HbS of 10%–11%.

The symptoms of sickle-β thalassaemia are due to sickling need to be treated accordingly.