The earliest morphologically distinct myeloid cell is a myeloblast. Cell with myeloid commitment at stages of differentiation between the pleuripotant stem cell and myeloblasts have been identified but these lack morphological characters of a myeloid lineage. Myeloid cells share a common precursors with the cells of the monocyte-macrophage system in the form of CFU-GM. CFU-GM matures into CFU-G, a precursor for myeloid cells and CFU-M, a precursor for cells of the monocyte-macrophage series. There are five morphological distinct stages of myeloid precursors, myeloblast, promyelocyte, myelocyte, metamyelocyte and the band form. Only the first three are capable of cell division. Myeloid cells in the peripheral blood are classified into neutrophils, eosinophils and basophils depending on the staining characteristics of the cytoplasmic granules. Morphological evidence of commitment one of the myeloid lines is seen at the myelocyte stage. Electron microscopically commitment can be seen at the promyelocyte stage. 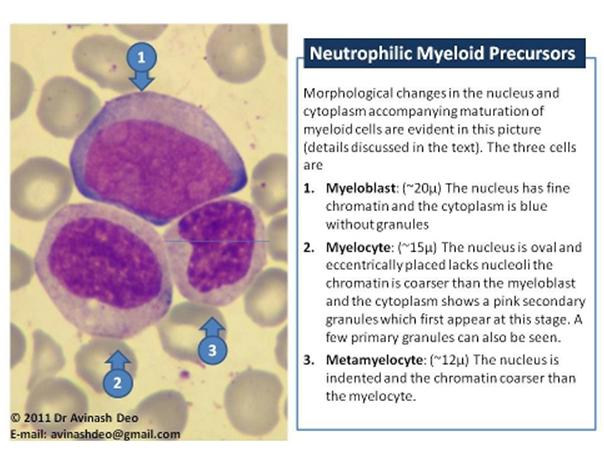 Myeloblast (Figure 1, 3 and 4): Cells 10-20μ in size with a large slightly round nucleus with fine chromatin showing no clumping. Fine chromatin gives the nucleus a sieve-like or a finely granular appearance. The nucleus shows 2-5 pale sky-blue nucleoli. The nuclear membrane is exceedingly thin. Lymphoblasts nucleus may be differentiated from myeloblasts by the coarser chromatin, fewer nucleoli and the clumping of chromatin near the nuclear membranes. The cytoplasm of a myeloblast is basophilic but the basophilia is less marked than the lymphoblast or pronormoblast. Of the three types of leukaemic lymphoblasts the L1 (small cells with few nucleoli and a thin rim of cytoplasm) and L3 (strongly basophilic cytoplasm with prominent vacuolation) can be easily differentiated from myeloblasts morphologically. Differentiation of myeloblasts from L2 blasts on morphological grounds alone may not be possible. Perinuclear clearing is a feature of pronormoblasts and is not seen in the myeloblast. By definition myeloblasts have no granules but some classify cells with a few granules as myeloblasts particularly in the presence of abnormal myelopoiesis. In addition to granulation leukaemic myeloblasts may show nuclear furrows and Auer rods. Three stages in the maturation of myeloblasts are recognized

Very immature blasts lack morphological features of any lineage making it impossible to classify them as myeloblast, monoblast, lymphoblast or pronormoblast. Lineage identification in such cases may be aided by the company they keep, immunophenotyping and staining for peroxidase and esterases.

Promyelocyte (Figure 2): Slightly larger than a myeloblast (15-25μ), the promyelocyte is the largest cell of the myeloid series. Its nucleus is slightly indented, has a fine chromatin (though coarser than the myeloblast) and has nucleoli. Later stages show a slight chromatin condensation along the nuclear membrane. The cytoplasm is basophilic with prominent primary azurophilic granules. Endoplasmic reticulum is prominent and takes the form of dilated vesicles. Cells have a perinuclear Golgi apparatus that manifests as a perinuclear halo, but only in normal cells. Tough it is not possible to differentiate the promyelocytes of the three granulocytic (neutrophilic, basophilic, eosinophilic) series on light microscopy, electron microscopic difference exist. Leukaemic promyelocytes may be of the hypergranular or the hypogranular variety. The hypergranular variety has numerous small granules and Auer rods. Patients usually present with pancytopenia. Apart from having few or no granules in the cytoplasm the hypogranular variety may have a bilobed or folded nucleus.

Band and Segmented Granulocytes (Figure 3): The indentation of the nucleus characteristic of the metamyelocyte increases and the nucleus becomes ribbon shaped. The nucleus of this cell has parallel borders for most of its length, like a band, and the cell is thus known as the band form. As the cell matures the nucleus becomes segmented. The segments are connected by thin strands of nuclear material. A constriction of more than half or two-third is accepted as segmentation by some. Neutrophils usually have 2-5 segments and eosinophils usually have 2 segments. Segmentations of the basophil nucleus are obscured by the intensely granular cytoplasm. The basophil nucleus ahs 2-3 segments, appearing in the contain few granules

Relates posts in this site