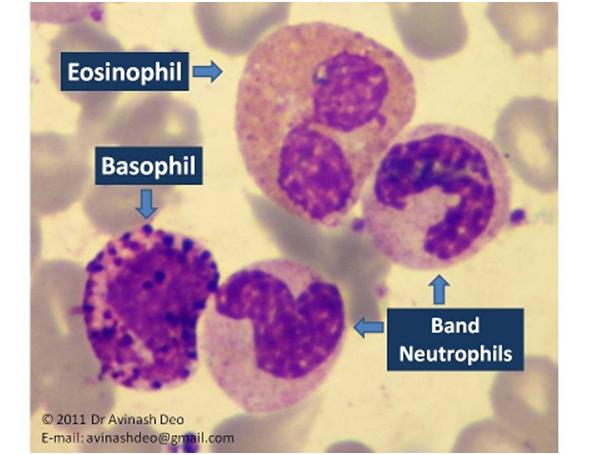 The neutrophil nucleus is segmented. The nucleus of the most immature neutrophil, band neutrophil lacks segmentation. It differs from a metamyelocyte in that the concave and convex surfaces of the nucleus are parallel. It may be coiled as is the case of the cell next to the basophil in figure 1.

Infection and inflammation result in increased neutrophil production. Young neutrophils have fewer lobes and the average neutrophil lobulation decreases (shift to left, smaller numbers occupy a left position on the X axis of a graph). Other inflammatory changes including leucocytosis, toxic granules, Döhle bodies and neutrophil vacuolation may also be seen in patients showing “shift to left” because of infection/inflammation. Patients with chronic myeloid leukaemia (CML) and other myeloproliferative diseases or myelodysplastic/myeloproliferative disease (MDS/MPD) also show a shift to left but it is usually possible to differentiate these conditions from infection/inflammation. Peripheral smear of patients of CML (typical and atypical) and chronic myelomonocytic leukaemia show the entire spectrum of myeloid cells (myeloblasts, promyelocytes, myelocytes, metamyelocytes, band forms and segmented neutrophils). CML shows more than 10% immature forms and without monocytosis. Chronic myelomonocytic leukaemia usually shows less than 10% immature forms and shows an absolute monocyte count more than 1 X 109/L. The BCR-ABL translocation can be detected in patients with CML, but not in atypical CML. Band forms and cells with few nuclear segments dominate the peripheral smear in infection/inflammation. An occasional myelocyte or metamyelocyte may be seen. A promyelocyte or myeloblast is almost never seen. When these cells are seen in seen in substantial numbers a diagnosis of MDS/MPD should be considered.

In women one of the X chromosomes is inactivated and appears as the drumstick appendage. It is seen in 0.5-2.6% of the neutrophils. The prevalence of the drumstick increases with segmentation of the nucleus.

The exact mechanism and purpose of segmentation of the granulocyte nucleus is not known. It may aid in making the cell more deformable and allow it to squeeze from the vessels into the tissue. It is rare to find a neutrophil with more than five nuclear lobes. Increased nuclear lobulation is a feature of megaloblastic anaemia, iron deficiency anaemia (Br J Haematol 107:512;1999), uraemia, infection, myelodysplastic syndromes and hereditary neutrophil hypersegmentations. Hypersegmentation increases the average neutrophil lobe count and hence the term shift to right. A ratio of five lobed to four lobed neutrophil of 17% or more is the most sensitive indicator of shift to right. Hypersegmentation due to megaloblastic anaemia recovers in about two weeks after initiation of therapy (Ann Intern Med 90:757). Hypersegmentation can be used for diagnosis in patients who have been empirically treated with vitamin B12 and/or folate as other disease related changes rapidly revert to normal. Macropolycytes are large neutrophils often with a hypersegmented nucleus. They are tetraploid (have 96 chromosomes instead of 48 chromosomes). Hypersegmentation in macropolycytes reflects increased DNA.